For those of you that want to gut a team and make some trades in Madden 19 Connected Franchise Mode you are probably still in luck. The attention given to custom draft classes is something I have been praising over the last week. It doesn’t mean that other hugely important aspects of CFM have been tuned or fixed in any way. After starting a CFM from scratch with in Madden 18 with the preseason roster with a preseason starting point I wanted to see what I could get for my Browns. The team that tanked the 2017 season would get a fresh start once again in the spirit of erasing bad memories. May I say, Madden trade logic will make ANYONE into the greatest GM in the history of sports.

The first move I made was to trade away Osweiler like the Browns tried to do, but ended up eating his $16 salary in real life. Madden is where real life trade logic goes to die.

I ended up getting a projected #2 Overall Pick for Osweiler and two running backs that I was going to release anyway. How can Madden say this is good value? You will be shocked by the next trade I made. 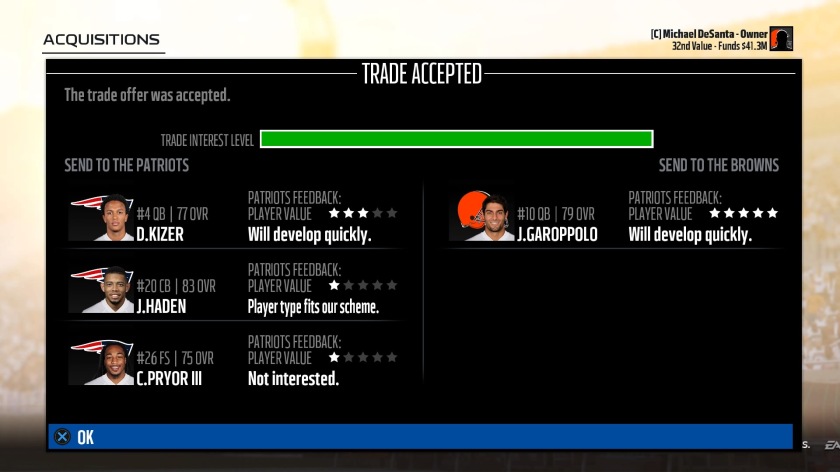 This was a trade that I probably overpaid for in terms of Madden logic, but when you consider that the Browns traded away Haden last year, Kizer in the off-season and released Pryor before the season started last year for arguably the best young QB available at the time in Jimmy Garoppolo? It was a great trade to get my team a long-term answer at the most important position. 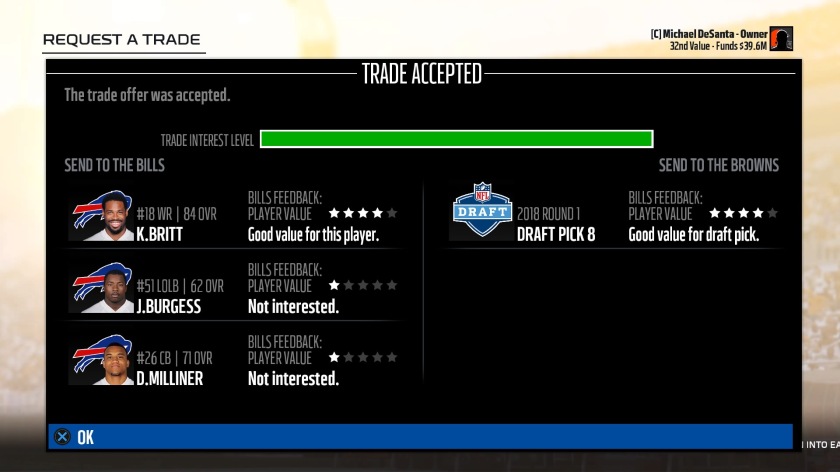 I then made another trade that saw not only another short-lived real life Browns contract in Britt go along with a player I just signed (Milliner) and another disposable player that would likely be cut in Burgess. In return I got the projected #8 Overall pick in the 2018 Draft.

Add in a trade of Danny Shelton, Desmond Bryant and Tank Carder to Seattle for their 1st round pick to boot.

All things said and done, I managed to obtain three more 1st Round picks and a Franchise QB for a team that was projected to finish the season 0-16 in 2017. Add on to this the fact that the Browns already had a treasure trove of picks for the 2018 draft and they literally hold 15% of all first round picks as well as a QB that I would sign to a long-term deal in the off-season. It’s hard to imagine that EA Tiburon made any big changes to this simply because they haven’t talked about it yet – they love to talk about little things and they gush at what they consider their big changes (Custom Draft Classes, I’m looking at you).

I will be creating an overhauled set of house rules for Madden 19 CFM in the coming months. It will be more important than ever to set rules now that we will have the ability to see the draft classes prior to starting each season. It could potentially destroy immersion if you know all of the best players and it could really be a game killer if the trade and draft logic aren’t fixed as well.

Look for more to come as we enter Madden Season.

I noticed during my 5th season in Franchise Mode with the Browns that I could move down in the draft one spot and gain a first round pick in the next draft.  While I don’t really enjoy making videos or posting blogs about Madden and some of the flaws therein, I must admit that the more I play this game and pay close attention to the trades and what I can do from a front office perspective in Franchise Mode – the more I notice exploits and flaws like this.

You want to build your team through the draft but you can’t get that coveted 1st round pick from another team for the coming draft?  Happens all the time…  If you want to stock up on your picks this video will show you how.  Even if it is based on bad trade logic.  Hopefully EA fixes this in Madden 13.

Now that the regular season is over and my Browns are set to get a Top-5 pick that they will use on Tim Couch, Courtney Brown or William Green it is time to focus on fake, digital, monopolized football gaming from EA Sports.  The issue of trade logic has been a contentious one to say the least.  While we will be covering more Madden issues in the coming weeks we will start with what kicks off the football season for most NFL fanatics – the NFL Draft.

The Draft is one of the most popular parts of the NFL (minus the Super Bowl).  Draft picks are often held at a premium, even more than superstar players… okay, maybe not all teams feel that way (The Oakland Raiders).  The issue with Madden’s trade logic is on-going and has been since the game came to PS3/360.

One issue that has been in Madden’s trade system since Madden 2002 is the ability to milk teams for draft picks or players based on faulty logic and a broken system.  This is covered in the video below.

There are many issues with this game that seem cosmetic to most people.  However, if you pay attention to sports gaming like some of the people of that niche community do (myself included) you will see that EA has put out an inferior product ever since they got the sole license to create NFL videogames.  Back in 2004 they had to compete with 2KSports and NFL2K.  While I was never a big fan of 2K’s games, they noticeably pushed EA to put out a quality product every year.

Now that that time has passed, we are stuck with Madden and the only growth that comes year after year is cosmetic.  While this may is a rant, there is a sincere hope that EA Tiburon makes the needed improvements we will cover in the coming weeks.

On a personal note, I have to say that this iteration of Madden has given me a lot of confidence that they MIGHT be going in the right direction.  I am now in my 5th season of Franchise Mode and it is going strong.  Here’s hoping that 2012 brings a fresh face to football gaming – and maybe a fix to a pathetically simple exploit in the trading system. (Watch the video) 😉