We have been focusing a lot of attention on some of the primary gameplay and AI interactions in Madden 13 over the last 24 hours.  Now it is time for a couple quick reasons for you to look at Madden from the stand point of it simply being a great experience.

The first thing you usually do in a sports game is skip the introduction.  Usually it is some sort of random highlight collection from the sport you are waiting to play digitally.  You won’t want to skip over the one in Madden 13 when you first boot it up and maybe not ever.  It is that good and with that said, here it is for your enjoyment.

As I started into the regular season with my Browns Coaching Connected Career I decided right away that Brandon Weeden wouldn’t be the starter for the long term and set my sights on the #1 Prospect out of Weeden’s alma mater – Oklahoma State’s Stephen Diaz.  I was excited about the prospect of going after what some were calling the next Andrew Luck, but then something happened when I advanced to Week 4.  There was a headline that said “Violation Issues” and I was thinking that I had misread the headline.  I hadn’t misread anything and now all of a sudden Diaz was no longer on scouting list and I was left wondering what the hell I could do to get the scouting points back that I had spent on him. 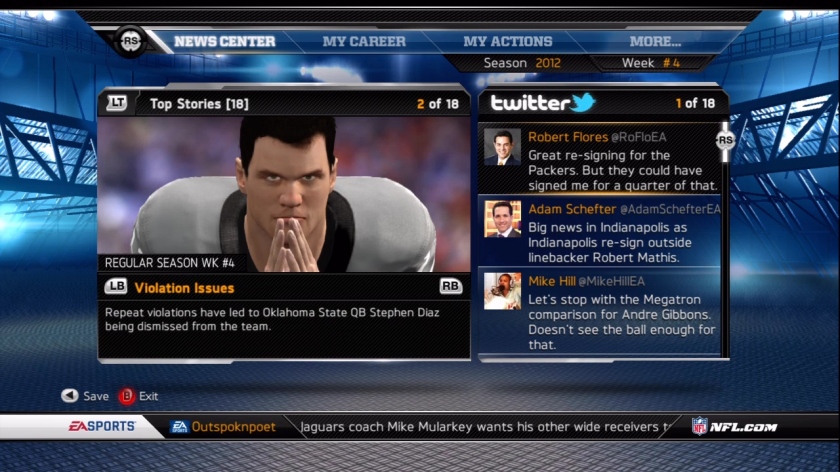 It was a great feeling from the perspective of having a real living league…  for the first time ever you will really have some stories to pay attention to in Madden and trust me, you will want to make sure you diversify your scouting points to multiple players.  Just in case someone has an issue with violations.