There are all sorts of needs when it comes to Madden from a game-play perspective.  As many of you know by now – I almost exclusively play Offline Madden Franchise Mode.  There are so many aspects of the NFL that keep us interested all year and today we are going to focus on some of the things that Madden (or any other future football game… Are you listening 2K?) needs in Franchise mode. 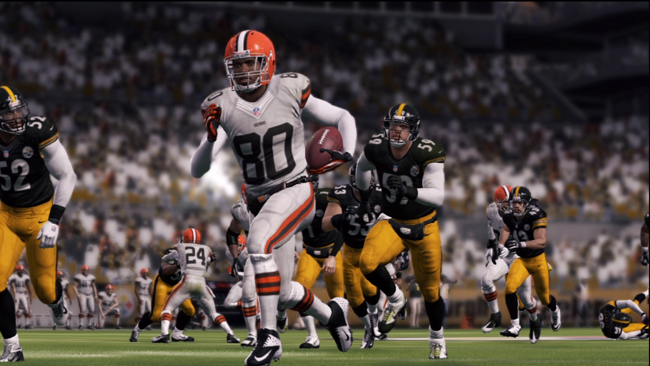 If you have paid attention to any of the contracts signed by NFL players in the last few years you will see that many of these contracts are not nearly as simple as just throwing out a number and having it accepted or declined.  Madden has always had a problem with making contracts too simplified.  In that regard it has also made Franchise Mode exceedingly easy from a management perspective.  You can always low-ball a player or get someone on the cheap if you know your way around the salary cap.  Here are a few ideas on what would make this a bit more realistic and more challenging as you advance through multiple seasons.

Another part of Franchise Mode that has been getting better incrementally over the last couple years is the NFL Draft.  As we enter the final week before the NFL Draft (in real life) there are many things that are becoming more apparent when looking at the draft and scouting in Madden.

As a Browns fan one of the biggest (if not, THE biggest) days every year is the NFL Draft.  A lot of people feel this way but for teams like the Browns and all of the Browns Backers out there, it is a day where we fill ourselves with hope and beer as we watch and listen for rumors of who will be taken to turn our team around.  In the past, Madden’s Franchise Mode has grown to be a serviceable game mode but the one thing that has been lacking was atmosphere and purpose in the off-season and especially in the draft.  This year that has changed and we are happy to embed a video by one of EA’s Game Changers (MadScientist06) that shows you what the NFL Draft feels like in Madden 13.

While there are some things that I would like to see tweaked for Madden 14 and beyond, this is one of the finest examples of growth in Franchise Mode that I have seen in years.

+ Limiting Picks to 2-minutes – This is one of the things that had to be done to give every pick the urgency you feel as a viewer on draft day.  Sure, in reality you have more than two minutes, but in Madden it is you and your scouting expertise with a controller and a twitch reaction of pressing the ‘A’ or ‘X’ button (depending on your console).  This is a great move either way you spin it.

+ Story-Lines For Certain Players – Stories are what make sports so amazing.  Try to watch the Olympics or the NFL Draft without hearing about some guy who showed up one day and amazed people with his ability.  Or on the flipside, remember that player that was supposed to be the number 1 pick and he ended up falling to the second round because of work ethic or something else entirely?… that is what the draft is about and it is finally in Madden.

+Twitter Feed – Bringing in personalities from the sports community was genius.  I love to hate Skip Bayless most of the time and when he called MadScientist06’s pick of Corey Dallas the culmenation of  “…Dumb, Dumber, Dumbest!… A TERRIBLE pick!…” This is what I have been waiting for since Madden 2005’s boos and cheers.

What Makes Me Nervous

– Draft Logic – It is one of those things that has been improved over the years, but some teams are still making questionable decisions in the draft.  At one point you see the Rams taking a Quarterback – they already have Sam Bradford, but who knows… maybe he broke his arm?  Either way, this is something that should be perfected over time and you will probably give some picks a strange look.  You could always just say that the spirit of Al Davis is possessing people.

– Unlocking Ratings – I have never been a fan of Madden’s rating system being thrown out there as the end-all/be all for how a player is judged.  I love that you have to spend points on opening certain ratings but in reality this isn’t a good simulation of how information is gathered (at least from a fan’s perspective).

– Scouting Still Limits You – If you take a look at NFL.com’s combine coverage, they list the stats and times of every player that participated.  I don’t really think you should be able to see every rating of each player, but I should at least have the resources as a coach/owner to look on the internet and look at a player’s 40-time if he was at the combine.  In the future I would like to see this presented with a ‘range’ of times if we are looking at speed.  The Raiders base most of their drafts off of combine numbers while the Patriots look at their scouting over the year.  You should have both options and especially the combine numbers for every player.

Keep tuning in to NoobTubeTV as this is going to be a very busy week in the world of Madden (only 8.5 days left until release day).