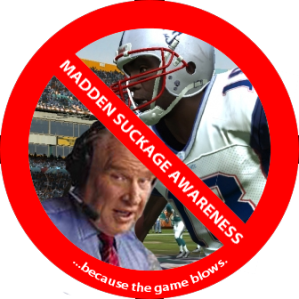 This is one of the more risky topics I have covered for the sake of this site and the popularity of all of my Madden NFL coverage in recent years.  That being said – I am having a difficult time these days wanting to write or cover any sort of news from the Madden NFL front, let alone anything positive about the series.  It has been a journey of ups and downs covering EA’s football games and it has finally come to a point where I am questioning whether this title is worth anything more than obligatory coverage for the sake of web traffic.

It Is The Same Game – Every. Single. Year.

Madden doesn’t change.  There are roster updates and a few tweaks to gameplay, sure.  I don’t expect Madden to become a baseball game or something either.  While continuity and general similarities should be expected in a sports title I can’t help but wonder where the innovation has been over the last decade.  The last Madden game that really changed anything was Madden 2005 and that was the hit-stick that does nothing but aesthetic value for hits that cause no real injuries to occur (most likely because the NFL demands that such ‘violence’ not be realistically put into the game).

Nothing should make a developer more upset than people still preferring another title that hasn’t existed for ten years over their current game.  While NFL 2K has a cult following among a relatively small group of sports gamers, it is still worth pointing out that not only do they exist, but they are quite devoted to never buying a Madden game.  Even if we were to look at All Pro Football 2K8 from this perspective.  It still holds up to the improved graphics and physics of Madden because it plays like a real football game.

EA Sports and the NFL Hold Madden Back

This might be the biggest issue that causes Madden to be such a dull experience.  EA Sports has exclusive rights to create the NFL in video game format for consoles.  This means that their goal has nothing to do with the game being innovative or realistic.  It has everything to do with the bottom line and whether or not profit is being obtained annually.  While this is clearly the goal of any ‘successful’ business, it remains to be seen where this will ever lead to any real innovation in the future.

The NFL has come under fire in recent years for concussions and injuries from the danger of playing football.  Rather than coming out and saying that the game has risks and standing firm on the grounds of the game, they have bowed under the pressure of lawsuits that have started to slowly ruin the game.  We have gotten to a point where in Madden, they can’t allow realistic injuries to occur because the NFL doesn’t want to market that aspect of the game for fear of being sued some more.  It is a farce and the political correctness is hurting the game on consoles and on the field.

The Community Is Dying A Slow Death

Madden 10 was the last time I was truly excited about a Madden title; and it was also the last time I pre-ordered the game.  The interaction with Ian Cummings and Co. made me feel like I actually had a stake in the game before it was released.  They took the opinions of sim sports gamers seriously and really tried to make the game realistic.  To their credit, they did make a damn good game that year.  There were a lot of signs that started to point in the direction of Madden becoming truly innovative and a game for ‘real football fans’.  That died in Madden 11 and 12 as EA tried to once again dumb down the game for ‘casual gamers’.  Again, it was and will always be about the bottom line rather than innovation.

The aspect that EA seems to have forgotten is that the sports gaming community is their primary ‘Day One’ sales target.  In this regard, they have been losing more and more customers over the last four years because they have taken away those interactions and decided to make the same game every year.  Madden 13 and Madden 25 are virtually the same game.  The commentary is the same garbage and the terrible gameplay and AI is still there.  The CPU still calls a timeout when they have the ball at the 1:01 mark and they still call the same pathetic plays at the end of close games.

Do you really think that this would be the case if there were some sort of competition?  Better yet, do you think these issues would still be around if EA still took an active approach to seeking the input of the consumer?

Where do you stand?  Are you sick of Madden yet?  Are you still playing and older version or a 2K title?

One thought on “Is Madden NFL Still Relevant?”