For those of you that joined in my cheers about the initial announcements regarding Madden 19’s Franchise Mode – please don’t get too hyped.  If you look at the pre-order bonuses and such, this game is still obviously focused on the cash cow that is Ultimate Team.  In being focused on MUT, there are things that quite simply will NEVER change in terms of gameplay. 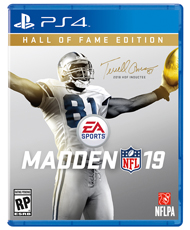 If you watch any of the YouTubers or Twitch guys that post pack opening reactions and footage of them playing online MUT matchups you will see that there is good reason for EA Tiburon to keep the game as loose and arcade-like as possible.  I will admit, I have watched a few of the pack opening videos from various YouTube personalities and I feel like I am basically watching a hyped up commercial on EA’s Home Shopping Network.  I’m not hating on what makes these people happy or gives them YouTube success – keep doing you and get that YouTube money before they decide to find a reason to kick you off the pay platform.

What I find disconcerting is when Madden continues to push a mode that doesn’t encourage gameplay to become more realistic by default.  MUT is not and will never be a mode that encourages Tiburon to make Man to Man coverage a true representation of what we see on Sundays (Thursdays, and Monday’s) in the fall.  I can appreciate this aspect as sometimes it gets frustrating in any game to feel like you aren’t controlling the actions of the primary character at any given time.  MUT has to remain focused on player control and the arcade style that brings the money well after the game has released.

However, why is it that spin moves and jukes from players result in locked animations from tacklers three yards away?  Why do we continue to see AI make gameplay decisions that would baffle a 5 year old?  It’s a continuing sign of what EA Tiburon has a true problem replicating – 11 on 11 football.  Every time you play against a human opponent it becomes a 1 on 1 matchup, not a true football game.  Consider this the next time you switch to the DB in coverage during a long pass down the field.  Sure, it’s supposed to be a game that you play, but it doesn’t bode well for those of us that want some semblance of real football.

The spin, juke and other break tackle functions in Madden 18 were so overpowered and glitched simply from the interaction and animation system that I stopped playing the game in early December.  I played a few MUT games and even won a championship, etc.  At the end of the day, I wanted to play simulation football in CFM (OFFLINE) and I was greeted by such an artificially weak CPU opponent that I couldn’t justify booting up the game.

What do you think?  Are you a MUT player or a Sim Football purist?  Will the history dictate your purchase of Madden 19?