Just like any other sort of currency, you need to save, invest and spend your XP properly if you want your players to develop into juggernauts.  In some ways you may also want to spend XP differently on players you know you won’t keep or can’t keep. 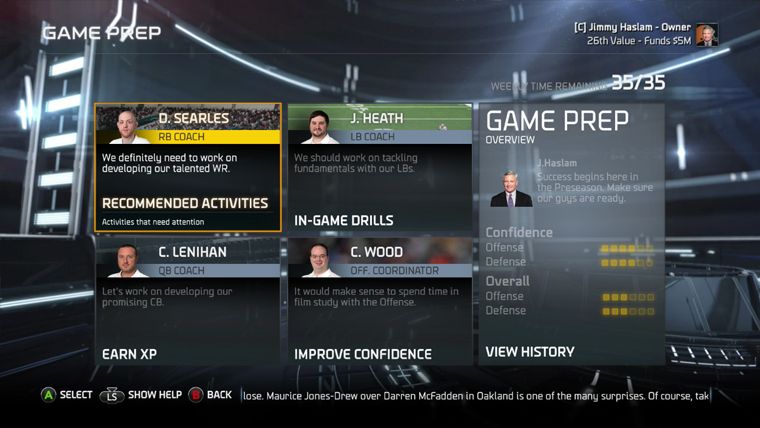 Earning XP –  You will want to look at each player’s development trait in the ‘Progress Player’ screen before spending lots of points on them.  This will largely determine whether or not they will earn more points by performing extraordinarily.  Also, there is the ‘Consistency’ rating – this is key in helping players progress if they don’t get a lot of playing time or targets in games.  There is something you need to consider and determine on multiple levels before you spend your allotted hours on certain players – Do their expensive ratings warrant future investment?

If you are wanting to upgrade a WR, do you really want to spend XP on one that has 85 SPD?  Will it be cost effective to spend money on increasing his SPD?  Some may say that it is totally worth it – and that is fair and good.  Go for it.  However, if you really want to make the process easier you will want to check and upgrade their ‘Development and ‘Consistency’ ratings, respectively.

Upgrading development will increase the amount of XP a player earns for achieving goals in game – this includes obtaining awards, reaching milestones and other performance objectives.  Development costs 15,000 XP for each rating (from Slow to Normal to Quick to Superstar) – so keep in mind that it might take a season or two to build your favorite player into a Quick or Superstar Development rating.  However, once they are there – they will stay there and that is why it is worth upgrading quickly.

Upgrading consistency will increase the amount of XP your players will earn during weekly training in Game Prep.

Finally, earning XP is as simple (and difficult) as performing well in each game.  Once you have the necessary prerequisites (Development and Consistency) upgraded to your liking you will notice far more XP for each player you upgrade.

(Note: I argue that the confidence rating doesn’t matter nearly as much as the actual long-term ratings of players.  It could be because confidence simply needs tuned or patched to have a more dramatic effect – but with EA’s track record – I doubt it.)

Spending XP – This is one of the easier things to do once you follow the guide in earning XP.  It is entirely dependent on the player’s position and what type of player they are.  Here are the best ways to increase the OVR ratings or performance for each position (outside of ‘Consistency’).

(Note – I rarely/never increase player SPD or ACC ratings.  They are often too expensive to consider upgrading – and it helps with what little can remain simulation about picking ratings to increase for players in Madden.)

6 thoughts on “Earning and Spending XP In Madden 15”