I have been fielding questions from friends, family and NoobTubeTV visitors lately and now I will just put this out there for everyone to read.

The next-gen consoles really aren’t that different from each other.  With some minor differences in RAM speed and other internal tuning the consoles are relatively similar machines on the inside.  The real difference will come in the $100 difference in price on release day with the PS4 being the cheaper of the two.

Here is a side-by-side comparison of the system specifications. 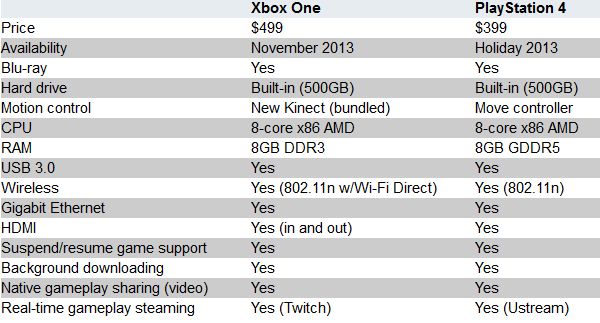 After going down this list of specs you won’t see much different in the primary specs.  Also, for those that say that PlayStation Online Network is free and XBox isn’t… that argument is over as PS3 will now have a fee to play multiplayer games.  However, that doesn’t mean you will have to find a new receiver for Netflix as it should (still) work just fine with the free online account.

Also, there are conflicting reports out there and let it be stated here that neither system is ‘backwards compatible’ with titles from older consoles.  However, the PS4 will be able to stream games from the old system if that is any consolation (no pun intended).  So, keep that PS3/360 if you plan on wanting to play Grand Theft Auto 5 for the foreseeable future.

What other questions do you have about the coming release of the new consoles?  Put them in the comments section below.