After more than a few years playing through numerous Franchise Modes in Madden, MLB The Show and NBA 2K it is apparent to me that the only truly important rating for a young player in Franchise Mode is ‘Potential’.  It is also one of the more argued about topics on sports gaming forums as well. 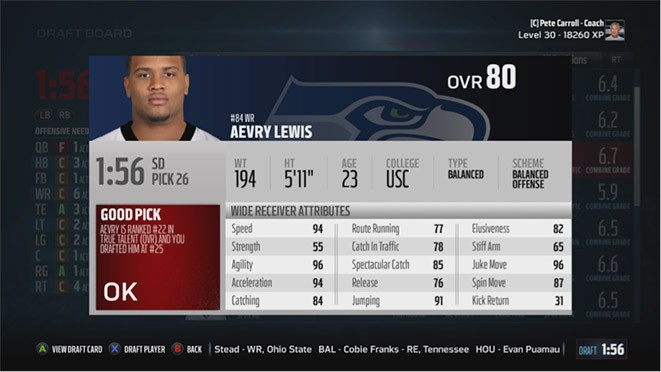 I have found that in simulating multiple seasons of MLB 18 (as well as older iterations) that the primary decider for a player becoming a superstar is potential.  It often has nothing to do with performance or statistics – take a look at the performance of some older players like Nelson Cruz as you play through a few seasons.  While they are still performing at a high level, they will suddenly see a huge drop off in ratings like contact and power as they age by a year… even if they hit 50 home runs the season before.

I have noticed that players with A potential are almost certain to be a lock for being s superstar in all three sports games.  Madden has a bad habit of making their franchise overall rating system as broken as anything else they put a number on in terms of ratings.

In the end, my view of the Potential Rating is not that it should go away completely.  I believe it needs to be molded to fit each game and sport.  Players generally fit into a few different categories of being high potential.  While Andrew Benintendi is no doubt a top level young talent, I don’t see him the same way I see Aaron Judge.  I believe that potential needs to be weighed more towards player type and player role in all sports games.

It shouldn’t be as simple as saying Player A should be a 99 Overall and Player B should be a 91 Overall in terms of potential.  There are some truly once-in-a-generation athletes like LeBron James that defy almost all limitations and are great at almost every aspect of their respective sport.

While a baseball player might look like a 5-Tool prospect, the reality of this is usually that they will be more like a 2 to hopefully 4-Tool guy.  As we play through more seasons of our favorite sports games it becomes easier to focus on the potential rating as the most important number by which we judge a player… unless you are talking about age… quite possibly the most lopsided and biased determiner of ratings decline in any version of a sports game.

Although we are able to edit the ratings of players manually in many of our Franchise Mode experiences, we shouldn’t have to take over where the number crunchers have failed us.  It is really as simple as applying a new descriptor to each player that highlights their role to a team.  This should be a fluid and dynamic description that also serves as a way to lift morale for players on the team.  I would like to see the death of potential ratings as numbers and have them become more in-tune with how we look at the changing landscape of players in every sport.