The best part about having the base 500 GB Hard Drive on my PS4 is that it serves as a nice tool to let you know which games you actually play the most. 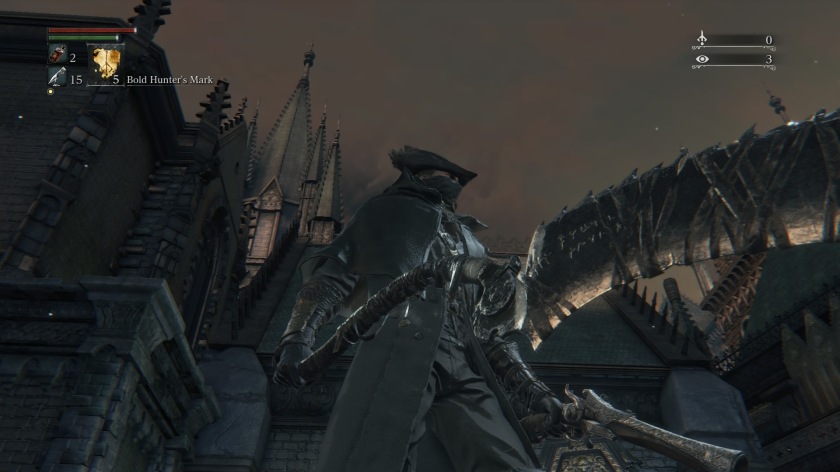 For myself, this is often a mix between a sports game I might be binge-playing (MLB 17 The Show), an adventure game (The Witcher 3), a shooter (Battlefield 1), a game to jack around in (Grand Theft Auto 5), and maybe a party game for when we have friends over (Tetris).
The one game you don’t see is Bloodborne.  It isn’t because I got rid of it or sold it.  It isn’t because I don’t like the game.  It’s simply because I beat the main story (finally) months ago and it took a lot out of me.  I had embraced dying – finally.  The worst part about it was that I couldn’t fully change my play style for a long time.  I grew up in the world of Atari, NES, Sega and other console/PC iterations of games that didn’t care if a game was fair or too difficult.  Once PlayStation and other consoles came out and eventually they tried to make games more ‘accessible’ (easy) and ‘less frustrating’ (stupidly easy).  Bloodborne was a violent shift from both of those things for me.  I had played more shooter and sports games than anything since 2005.  To say that I had been conditioned to play impatiently is an understatement.

This is one reason why Bloodborne and The Witcher 3 are among the better games out there.  It is simply because they force you to dive into the game you are playing and embrace what it is.  Bloodborne might have some of the deepest lore in any game I have ever played that doesn’t actually tell you openly about the lore.  You can go through and kill a bunch of nightmarish monsters and infected people if you want to look at it that way.  It doesn’t change the fact that their is something far darker and more terrifyingly deep in story than the world you wake up into in Yharnam.

The Witcher 3 is an interesting twist because it is the third game of a trilogy that many people have probably never played up until this point.  Not to mention, there are books and graphic novels, etc. that have been around for some time as well.  The story of Geralt and Ciri is a great one to play through, but this game is so much bigger than that story – quite literally.  If you really wanted to pour hundreds of hours into a game to read up on lore, make potions, battle monsters, and complete numerous side-quests – this is the game for you.  Did I mention that both DLC Story Add-Ons (Hearts of Stone and Blood and Wine) are among the best DLCs ever created for any game?  Did I further mention that they add at least another 20-30 hours to the game on top of it?

Both of these games are distinctly beautiful in drastically different ways.  The Witcher 3 looks like a constantly updating, living world where even bad weather can make you feel like you’re at a national park.  I challenge anyone to find a more beautiful sunset in a video game than those in The Witcher 3.

Bloodborne’s dark and picturesque gothic/victorian/Lovecraftian world is a thing of its own creation.  It is awe inspiring and terrifyingly engrossing.  I can’t help myself from wanting to see what is coming next – even if there is a creature waiting to bite my head off.  That says a lot about what this game really brings to the table in so many ways.  If you start to realize that you will get killed at any inopportune moment you will finally be able to play this game patiently and enjoy the view as much as the challenge.

Also, Bloodborne doesn’t give you a waypoint to follow.  The Witcher 3 can actually be customized to take away a lot of the hints and helper for getting around in the world as well.  I tend to leave these things on in The Witcher as the world is so huge it would be virtually impossible to navigate otherwise. This is still a decent change from a lot of games that send you on a linear path of ‘Go Here, Press X, Buy This Camo Pack for $0.99 to see next cinematic.)

Whether it’s simply because these games are breaths of fresh air or just great meshes of art and music coupled with the bonus that you get to participate in the respective worlds – it doesn’t really matter. These are two of the best games out right now and you can get both games with all DLC for relatively low prices.